Flocks of birds and schools of fish are two common examples of collective motion.  Though herding behavior in animals is well recognized, humans exhibit their own set of emergent phenomena.  For example, pedestrians walking down the sidewalk form lanes, and stadium crowds perform "The Wave".  In more extreme situations, like those found during an earthquake or a fire, panicked crowds can stampede causing injury and even death.  Thus, scientists try to figure out how to build buildings (or stadiums, concert halls, etc.) to mitigate these risks.  However, it's not exactly ethical to start a riot for the sake of science, so we're limited to simulating evacuations either with volunteers or on computers.  The problem with this is that panicked humans act according to very different social rules, adding a element of uncertainty to this research.  To address this concern, we used the extreme social conditions found at heavy metal concerts as a proxy to explore the emergent behaviors humans can exhibit in atypical circumstances.  To get an idea of what happens, see the YouTube videos at the bottom of this page.  These pictures also illustrate the basic situation: 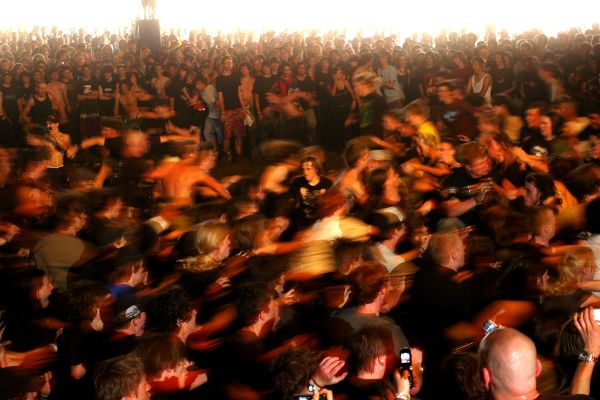 In this work, we analyzed videos posted on YouTube.com that were recorded at heavy metal concerts.  Using automated tracking techniques to quantify the crowd's motion, we examined the statistical character of mosh pits, a collective phenomenon where the participants (moshers) move randomly, colliding with one another in an undirected fashion.  Much to our surprise, we found this collective motion quantitatively resembles classical 2D gasses.  To try and understand the reasons why, we used a flocking-based simulation to investigate the phenomenon.  Flocking simulations model living beings as simple particles, reducing complex behavioral dynamics to a few basic rules.  In our case, we used two populations of simulated moshers, which we dub Mobile Active Simulated Humanoids, or MASHers.  Active MASHers move around and have a tendency to follow their neighbors (in the technical literature, this is called "flocking"), while passive MASHers prefer to remain stationary.  Mixing active and passive MASHers together, we found that when random collisions dominate the tendency to flock, the statistics of mosh pits are quantitatively reproduced.  On the other hand, when the situation was reversed and flocking dominated randomness, we found an ordered vortex-like state.  Looking back at videos of metal concerts, we found that actual moshers exhibited this vortex-like phenomenon too.  These so-called "circle pits" spontaneously emerge from the simulation and are an interesting example of collective behavior in humans.

The following videos give examples of some of the collective behaviors studied in this project.

FAIR WARNING: There is some profanity in the videos below.

(Related note: co-author Jesse Silverberg was at the concert shown in the movie above)

An example mosh pit from our simulation:

An example circle pit from our simulation:

Cornell grad student Kathryn McGill produces a YouTube Vlog called the Physics Factor that highlights the fun and interesting world of physics.  She recently interviewed Matt and Jesse about their work on mosh pits -- everyone had a lot of fun and the vlog can be viewed below.  Be sure to check out the blooper reel for some behind-the-scenes action!

Prof Phil Moriarty from the University of Nottingham and Sixty Symbols appeared in an excellent pop-sci description of the physics of mosh pits.  Be sure to check it out!