Origami is widely known as the art of paper folding.  In the last 20 years, scientists, engineers, and mathematicians have shown a steady and increasing interest in the field.  This melting pot of art and science has been productive for both sides.  On one hand, quantitative and technological advances have expanded the artistic repertoire and led to software (likeFreeform origami and Treemaker) that assists in designing ultra-realistic fold patterns.  On the other, origami has stimulated technological advances such as efficient methods forpacking solar panels and rapid airbag deployment. 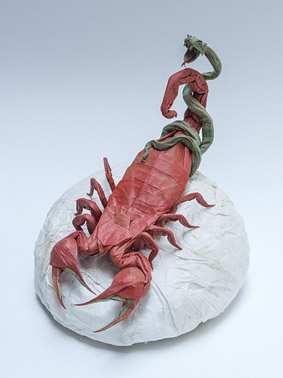 Scorpio-Snake by Nguyen Hung Cuo'ng - Even though this was folded with one piece of un-cut paper, the two-tone effect is accomplished by having the front and back of the sheet colored differently. 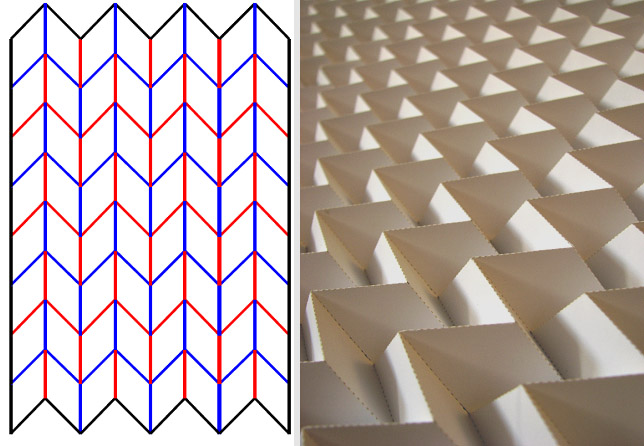 Miura-ori by Koryo Miura – Originally invented as an efficient way to pack solar panels for space missions, the Mira-ori exhibits exotic mechanical properties with far more potential applications.  Click here to get directions to make your own Miura-ori

By tuning the specific angles and lengths of the underlying crease pattern, properties such as the compressive modulus and Poisson’s ratio are tunable over a wide range.  Moreover, many origami structures have exotic mechanical behavior.  For example, while most materials will bulge when compressed, the Miura-ori is auxetic and thus will contract along the orthogonal direction when compressed.  The ability to control mechanical properties through the underlying folding geometry is a very attractive feature of origami presents enormous potential for technological applications.  Nevertheless, the range of possibilities remains unknown and the design framework is largely targeted for artistic applications.

Approaching origami with these ideas in mind, we studied the Miura-ori, which is emerging as the “hydrogen atom” of origami mechanics studies (for example, here and here).  Using custom built mechanical testing and 3D scanning devices, we quantified the relation between the underlying folding pattern and the emergent mechanical properties.

3D reconstruction of a Miura-ori fabricated in the lab from laser cut mylar – with a custom built 3D scanner, we can digitize each sample to measure its geometry as a function of mechanical loading.  This allows us to quantify deformation localization in response to applied forces.

We found that each unit cell in the Miura-ori is bistable, and by treating them as “mechanical pixels” we could reversibly modify the bulk stiffness.  In essence, a pattern of these pop-through defects (PTDs) is the equivalent of a program that encodes the structure’s compressive properties.  Moreover, by changing the configuration of PTDs, we can reprogram the mechanical metamaterial properties revealing that the Miura-ori is a form ofprogrammable matter.  Theoretically studying this unique intersection of behavior revealed that the behavior emerges from the separation of energy scales between folding along a crease and bending the flat facets between creases.  Ultimately, this competition leads to a phase space with two energy minima that drives the observed phenomenology.

We also studied PTD interactions by placing pairs on adjacent vertices.  In most cases, the behavior is qualitatively consistent with PTDs that are separated by a larger distance, but we found one particular configuration that stood out. In this case, the defects canceled each other out, reducing the overall modulus and simultaneously introducing a lattice vacancy into the tessellated pattern. 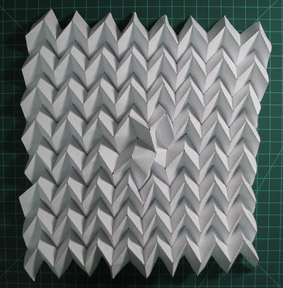 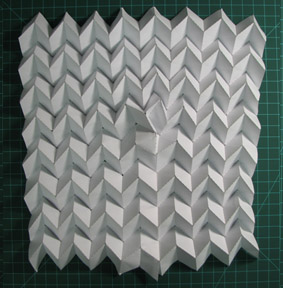 Photographs of hand-folded Miura-ori’s with a lattice vacancy (left) and a dislocation (right) – The unexpected discovery that certain pairs of pop-through defects (PTDs) interact to create lattice vacancies leads to a connection between these reprogrammable mechanical metamaterials and crystallography.

With the ability to remove lattice sites, we can map origami mechanics onto the study lattice defects in crystals, providing an additional framework for thinking about the programmability of the Miura-ori.  For example, a string of adjacent lattice vacancies leads to a dislocation, and adjacent dislocations can be used to generate grain boundaries.

These findings art part of a larger program we are currently undertaking to study origami, mechanical metamaterials, and enormous potential at this intersection of art and science.  If you’d like to explore the physics of origami for yourself, download the print the crease pattern and watch the tutorial video for additional instructions. 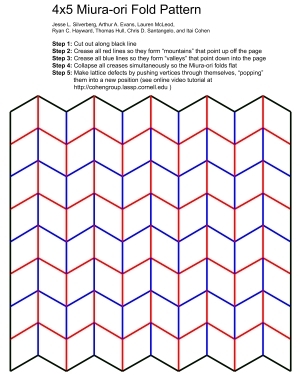 Tom Hull, one of the collaborators on this project, was intereviewed by the British Origami Society about the intersection of mathematics and origami.  Check out the video:

The world of metamaterials extends beyond the work described here.  Check out these YouTube videos featuring Julia Greer, Andrea Alu, and Roy Sambles to get a wider view of where the field is going.